A varied and rich musical tradition steeped in Anglican custom

For many people, music is an “incarnational experience” — the appearance of the divine in human form. Music has always played an important role in the spiritual life of Incarnation, evidenced by the church’s history of outstanding organists and music directors, including such names as Charlotte Wells, Edward Shippen-Barnes, Thomas Dunn, Leonard Raver, Jon Gillock and Matthew Lewis. This tradition continues under the direction of David Ralph, who was appointed Interim Director of Music in 2018 and Director of Music in 2021. Mr. Ralph infuses the music program with energy and creativity; he and his all-professional choir are a source of pride for the congregation.

As is the case throughout the history of the Church of the Incarnation, Christmas and Easter remain important sacred and musical celebrations for the parish and the community.

Incarnation’s all-professional choir offers a wide variety of music for the Sunday liturgies. Services for the Holy Eucharist feature traditional Mass settings by Haydn, Mozart and Schubert to modern works by Poulenc, Messiaen, along with American music. Morning Prayer Sundays include music of the great Anglican tradition, from Purcell and Byrd to Stanford, Holst, Walton and Britten.

Listen to our choir:

Send Out Your Light:

The importance of music at Incarnation is evident by the church’s history of outstanding organists and music directors, including such names as Edward Shippen-Barnes, Thomas Dunn, Leonard Raver and Jon Gillock. Unfortunately, records of previous instruments are lost, leaving a sketchy history regarding the first instruments at the church.

The current three-manual Aeolian-Skinner organ was installed in 1954, retaining some pipework from the existing 1902 Hutchings-Votey organ. Tonal changes were made in 1957.

In 1981, the Schantz Organ Company of Orrville, Ohio, made substantial tonal revisions to the Aeolian-Skinner organ, adding a floating Positiv division and several new ranks of pipes.

Additional work was done in 2000 when the console and relays were rebuilt and updated by the Petty-Madden Organ Company of Hopewell, N.J. In 2009, Petty-Madden restored all of the reeds, and replaced the Swell half-length 16′ Basson with a new 8′ Basson-Hautbois and the Choir Clarinet with a new Cromorne. 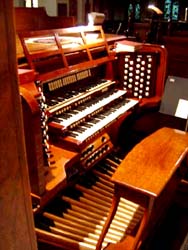 Church of the Incarnation Æolian-Skinner Organ