A historic Episcopal parish in the heart of New York City 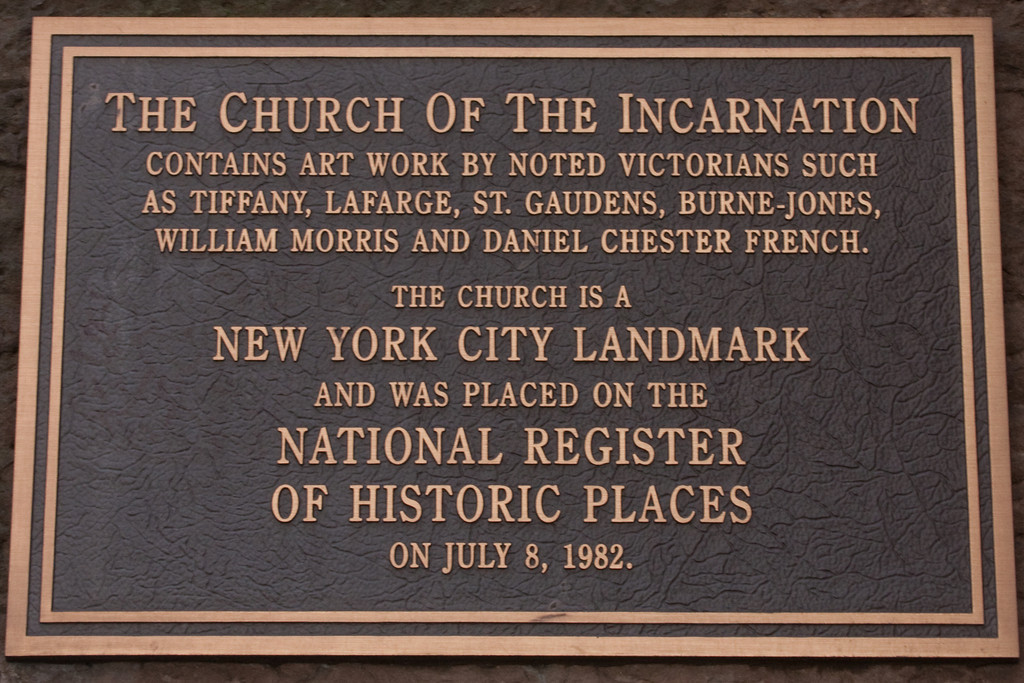 The first services in the church building were held on December 11, 1864. The architectural style of the church is “Neo-Gothic;” it is best known for the windows and other decorations by great American and English artists of the late Victorian period. Incarnation is a New York City Landmark and has been placed on the National Register of Historic Places.

During the 19th century, it was customary for Episcopal churches in New York to meet their expenses with a system of pew rentals, rather than through what has now become traditional weekly tithes. Certain pews were kept open for visitors and those who could not afford a pew, but some churches went a step further and built mission chapels where pews were either free or rented for very small amounts.

In 1850, such a chapel was established on Madison Avenue and 28th Street, as a mission of Grace Church, a famous Greenwich Village house of worship, which still stands on Broadway and 10th Street. Two years later, the growing chapel became an independent church under the name of The Church of the Incarnation. The Murray Hill area flourished, and new space was soon required. However, the rector at that time, the Rev. Dr. Henry Eglington Montgomery, refused to consider a larger building until Incarnation had first founded a mission chapel of its own. This was accomplished by 1863 on east 31st Street (today, The Church of the Good Shepherd), and land was duly bought for the new church on 35th Street and Madison Avenue.

The building, designed by Emlen T. Littell, laid its cornerstone on March 8, 1864, and had its first services on December 11 of the same year; it was consecrated on April 20, 1865.

Littell described the architecture as “Early Decorated Church Gothic,” with its opulent use of gilding, color, stencilling and painted panels. Frequently referred to as “Neo-Gothic,” the architecture of the church is historically based on the so-called English 19th century Commissioners’ style, named for the Commission of the Church Building Society. This group built modest, attractive churches for the many new communities in England created during the industrial revolution. The churches feature a narthex, an open nave with side aisles, and a short chancel; Gothic Revival style added steeply pitched roofs, towers and a clerestory.

Builder Marc Eidlitz is also known for the building of the former B. Altman department store, across the street from Incarnation. Today, the building is called the “B. Altman Office Superblock,” and houses the graduate school of the City University of New York, Oxford University Press, and the Science, Industry and Business branch of the New York Public Library.

In 1886 Incarnation rented a farmhouse at Mohegan Lake from R. Horne as part of a “fresh air” program sponsored by the New York Tribune. Children from the tenements of New York’s lower East Side, many of whom immigrated from Europe with their families during the 1880s, were brought from often squalid living conditions to spend a week in the fresh country air of upstate New York. The Rector, the Rev. Arthur Brooks, persuaded his parishioners to rent the furnished farmhouse, and on June 19, 1886, 25 young boys and girls from the east side of Manhattan became the first campers. Each summer, some 230 children benefited from the experience. Over time the Incarnation Center grew and became what it is now, a place for people of all ages and backgrounds to experience “Growth, Discovery and Renewal”

Our church was razed by a devastating fire in 1882, which destroyed the entire east end of the church, and melted all the stained glass. Left standing were only the western wall and the tower.

David Jardine was commissioned to oversee the rebuilding. Guided by Littell’s original design, the architect enlarged the building by increasing the length of the nave and deepening the chancel. The building was reopened for services at Christmas of 1882.

All the windows seen today were completed and installed no more than a decade after the fire. Depicting the religious narrative of cycles and events from Christ’s life in the New Testament, and with key figures and events from the Old Testament, the windows are executed by different artists from both sides of the Atlantic. Art scholars and historians agree that this collection represents one of the finest existing examples of glassmaking during one of the craft’s richest and most prolific periods.

After this point, there were a few improvements made to the building, among them a spire originally specified by Littel, but added to the tower in 1896 by the architects Heins and LaFarge; the Chapel of the Nativity, brought from England for installation in the northeast corner of the nave, and dedicated in 1903; and the small Chapel of the Resurrection, added to the base of the tower in 1930. The original doorway into the tower was filled in with a window depicting Christ’s Ascension. There appears to have been an additional otherwise unnoted renovation done on the chancel some time after 1912, when a dated photograph of the chancel featured a Latin cross between the LaFarge murals, the walls painted blue and terracotta, and the dome gilded. Visitors to Incarnation today will observe — in addition to the LaFarge mural and white marble altar — a central mural depicting six angels, an additional white reredos above the original altar, and a whitened dome featuring three clerestory stained-glass windows.

Ripples from the Stone Drop of Incarnation

Incarnation’s influence on American and religious culture is widely felt. Arthur Brooks, third rector, was instrumental in the founding of Barnard College; he fervently believed in the higher education of women, and served on Barnard’s Board of Directors for many years. His brother, fifth Bishop of Massachusetts Phillips Brooks, is best remembered as the author of the hymn O Little Town of Bethlehem. Admiral David Glasgow Farragut is memorialized at Incarnation; his oft-quoted battle cry, “Damn the torpedos! Full speed ahead!” is an integral part of the English language.

During the first half of the 20th century, many prominent New York families, the Delanos and Morgans among them, were members of Incarnation’s parish. Incarnation’s name decorates many wedding and baptismal certificates of the wealthy, famous, and powerful, though such events were normally held in private homes. Funerals were, however, held at the Church. When Franklin Delano Roosevelt’s mother died, Incarnation built access ramps to allow the son to attend her funeral.

Changes in Fortune – and Growth

In the latter half of the 20th century, Incarnation’s fortunes changed; just before mid-century, the rector recommended the church be closed and the property sold. John Atherton Bell, who served the parish for 32 years during this difficult time, managed to keep Incarnation intact into the 1970s.

With the arrival of the current rector, cost-cutting measures and concerted efforts at fundraising were made, and Incarnation is currently enjoying a surge in membership. In 1997, a record-number of baptisms were held on a single day: on December 7, seven persons were baptised, including infant triplets, two children, and two adults. In 1998, the largest confirmation class in living memory — eight adults — was presented to the Vicar Bishop, the Rev. Don Taylor, for confirmation or reception to the Episcopal Church.

Today, Incarnation is subtitled “the Landmark Church of Murray Hill,” and is one of New York’s Historical Landmarks, with major restoration work completed in 1992. A recent guidebook notes that Incarnation “contains some of the finest ecclesiastical artwork in America.” Any member of the Incarnation parish will also tell you that it’s one of the friendliest, warmest places to be. The services are beautiful, the art and light in the building inspiring. Most of all, the clergy and the people of the parish are welcoming.

We hope you visit us soon.

The church is open every weekday from 11:30 am until 2:00 pm. (Please note that due to the Covid-19 pandemic, weekday hours are currently limited to Wednesdays.)

During this time, visitors may wish to light a candle, enter a prayer request in the guest book, purchase postcards and devotional materials, pray privately or as part of our Wednesday 12:15 pm service, or take a self-guided tour of the church using the provided “Guide to the History of the Church.”

The Tour Committee engages visitors in informative tours of the church. Led by parishioners, the tours take individuals and groups through the neo-Gothic building designated as “the Landmark Church of Murray Hill” by the New York Historical Landmarks Commission. Guides are careful to point out Incarnation’s nationally known collection of ecclesiastical art, as well as its importance as a living, breathing church community. Tours are offered after the 11:00 am service on the first Sunday of the month and by appointment. Please call the Parish Office 212-689-6350 for more information. (Please note that guided tours are currently suspended due to the Covid-19 pandemic.)

The Church of the Incarnation is located in a historic neighborhood named after the Murray family farm that once occupied the area. Today, Murray Hill is a unique residential enclave nestled in mid-town Manhattan, south of Grand Central Terminal, the Chrysler Building and the United Nations and north of the Empire State Building, NYU Medical Center and Kips Bay/Gramercy Park. The Murray Hill neighborhood spans from Fifth Avenue on its western border all the way to the East River.

How to Reach Us

The Church of the Incarnation at 209 Madison Avenue is located on the northeast corner of Madison Avenue and 35th Street in midtown Manhattan, New York City. The main entrance faces Madison Avenue. The Parish house is adjacent to the church building, to the north.

Take any line to Grand Central Station. Enter the main waiting area: a large room with a blue ceiling painted to represent constellations, with a round information booth in the center of the room. Walk onto Park Avenue, and head south to 35th Street; make a right toward Madison Avenue.

On Sunday street parking is available in the area, there are also Parking lots nearby – the closest are at Park Ave. and 36th Street, and on Park Ave. between 34th and 35th Street.