On the mind of the Rev. Paul Kennedy

Today’s spiritual reflection comes from the Rev. Paul Kennedy, Priest in Charge at St. Vedast-alias-Foster, our sister parish in London.

The late Queen’s body was coming to London to rest in state in Westminster’s ancient Great Hall, the oldest part of our Houses of Parliament. At the same time, some 200 ministers met on a Zoom call to share their ethos and their diaries. We had been offered the opportunity to be chaplains to the queue (line) of people waiting to pay their respects to our late Queen. This was a momentous time for Britain, the passing of our monarch marking the passing of the post War era.

I was struck when a Muslim chaplain suggested that the Christian chaplains majored on Friday and the Muslim chaplains could, in turn, major on Sunday morning. Thus ministers could both attend to their regular duties and be chaplains to the queue. This summed up the ethos of the chaplaincy team. We were there not to evangelise but to be a presence and to offer the opportunity for conversation, reflection and comfort. This is very similar to the role King Charles III perceives for himself as “Defender of the faith”, ensuring that there is space for faith.

I did two shifts towards the end of the queue. My first was with a humanist chaplain; my second with a Christian priest, with a rabbi ministering a bit further along. Mainly it was talking and reflecting, occasionally accompanying someone to the first aid tent, also the ubiquitous selfie. The Queen was such a constant presence in all of our lives that her passing recalled, for many, the death of their own loved ones: parents or grandparents; siblings or friends; as well as recalling our own frail mortality. Despite people queueing for about seven hours, on my shifts, everyone was upbeat in their tiredness with the companionship of the new friends that they’d made. Strangers kept places in the queue, while toilets and coffee were sought.

The experience was so inspiring that I immediately decided to walk the queue when my second shift ended. I spent 10 hours, 7 pm to 5 am, over Thursday night / Friday morning. It felt like a pilgrimage: tired, cold, new friends, conversation, sharing and falling asleep on the floor. It was an incredible moment when we finally entered the Great Hall. The Queen’s coffin raised with the Royal Standard, crown and orb, soldiers standing guard in timeless dress uniforms and the complete silence. People who had been in conversation minutes earlier now in silent tears. Inaudibly we gave thanks and commended our Queen on to God following our own faith tradition.

It has been an incredible time for all of us in Britain and I was very conscious of our guests from the Ukraine: Iryna and her son Roman are with us in the Rectory. That week was a time of hope for them with an amazing counter attack. For us it was mourning but of course we have hope. Never before in our history have we had a new monarch and a new Prime Minister in the same week. A period of mourning passes onto a period of renewed activity and we look forward again.

God save the King 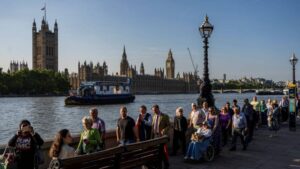