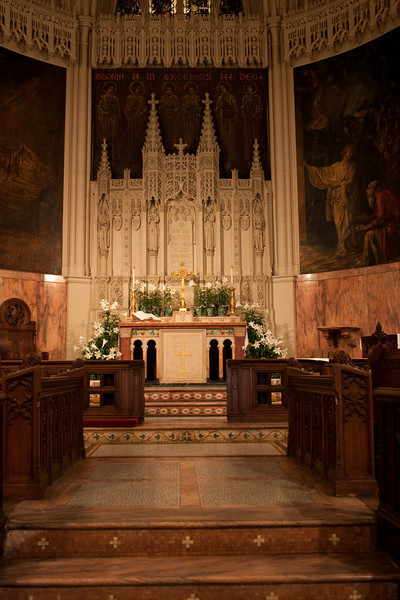 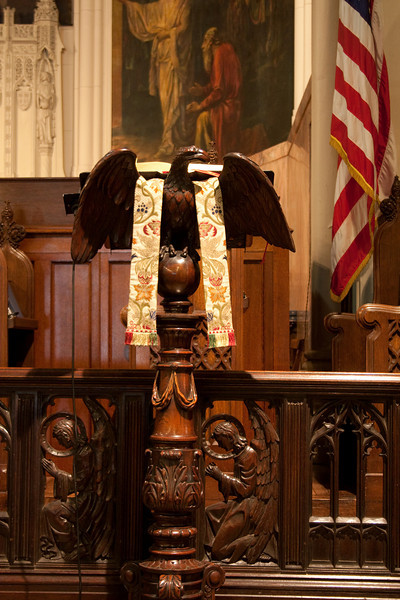 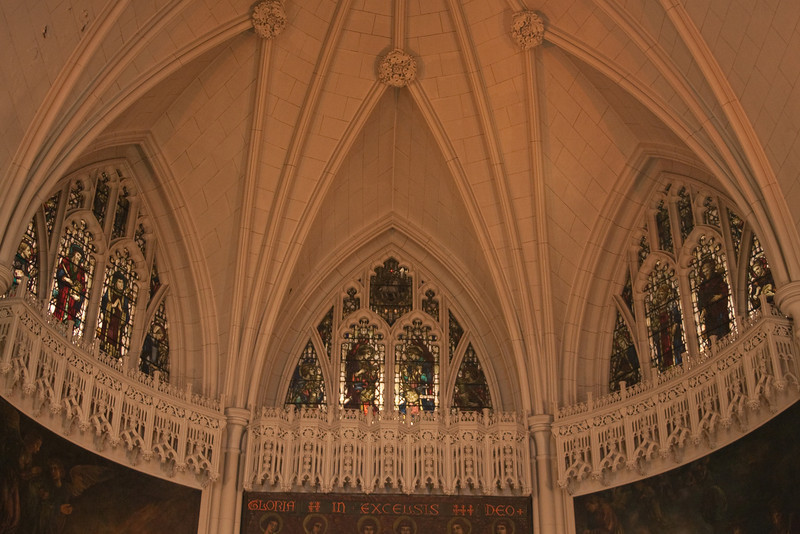 The marble altar was made by S. Klaber & Company from a design by Heins and La Farge, architects. The design incorporates many types of marble from different areas of the world, including Vermont, Georgia, Belgium, Africa, Italy, and France. The altar cross is bronze covered with a dull rose gold. The cross is richly ornamented in Gothic style with grapevine motifs symbolizing the blood of Christ. It is studded with garnets and amethysts. The cross and candlesticks were made by Gorham & Company.

The reredos is made of caenstone. Its three cherubim hold a banner bearing the words And the Word was made flesh and dwelt among us. On either side of the scroll, four angels rejoice at this Incarnation message and play musical instruments in celebration. A central mural, above the reredos, continues the theme of an angel choir. The are singing Gloria in excelsis Deo. The mural is by Henry Wynd Young. On either side of the central mural are two murals by John La Farge, who painted them in situ. They depict the Adoration of the Magi at the manger in Bethlehem.

High above the altar alcove are three sets of clerestory windows by Henry Wynd Young. The center set features a sacrificial lamb standing on the scroll of the seven seals, as described in the Book of Revelations. The flanking north windows show examples of the well-known post-Reformation figures Martin Luther, John Knox, John Bunyan, and Florence Nightingale (note her nurse’s cap). On the south side are three pre-Reformation saints: Elizabeth of Hungary, Edward the Confessor, and Francis of Assisi (with a rabbit). Also shown is John Rogers, and English Protestant martyr.

The carved oak pulpit was patterned after one in an Italian cathedral that the third rector, Arthur Brooks, had seen and admired. This, the altar, the carved chancel chair, and the carved eagle lectern were all given to replace chancel furnishings destroyed in the fire, and date from about 1884. The massive communion railing, also of oak, was given in 1891. All the wood was carved in the Daniel Chester French Studio in New York.

View next window in tour